Certificate of authenticity supplied with every item

Sorry, this item is out of stock. Get notified by email as soon as we restock.

Beyoncé Giselle Knowles-Carter is an American singer, songwriter, dancer, actress, and businesswoman. Born and raised in Houston, Texas, Beyoncé performed in various singing and dancing competitions as a child. She rose to fame in the late 1990s as lead singer of the R&B girl-group Destiny’s Child. Managed by her father, Mathew Knowles, the group became one of the world’s best-selling girl groups in history. Their hiatus saw Beyoncé’s theatrical film debut in Austin Powers in Goldmember (2002) and the release of her debut album, Dangerously in Love (2003). The album established her as a solo artist worldwide, earned five Grammy Awards, and featured the Billboard Hot 100 number one singles “Crazy in Love” and “Baby Boy”.

Following the break-up of Destiny’s Child in 2006, she released her second solo album, B’Day (2006), which contained the top ten singles “Déjà Vu”, “Irreplaceable”, and “Beautiful Liar”. Beyoncé also continued her acting career, with starring roles in The Pink Panther (2006), Dreamgirls (2006), and Obsessed (2009). Her marriage to rapper Jay-Z and portrayal of Etta James in Cadillac Records (2008) influenced her third album, I Am… Sasha Fierce (2008), which saw the introduction of her alter-ego Sasha Fierce and earned a record-setting six Grammy Awards in 2010, including Song of the Year for “Single Ladies (Put a Ring on It)”. Beyoncé took a hiatus from music in 2010 and took over management of her career; her fourth album 4 (2011) was subsequently mellower in tone, exploring 1970s funk, 1980s pop, and 1990s soul. Her critically acclaimed eponymous album, released in 2013, was distinguished from previous releases by its experimental production and exploration of darker themes. Her sixth album, Lemonade (2016), also received widespread critical acclaim, with many referring to it as her most personal work to date, and subsequently became the best-selling album of 2016. She released her seventh album, a collaboration with husband Jay-Z as The Carters entitled Everything Is Love in 2018.

Throughout her solo career, Beyoncé has sold over 100 million records worldwide, making her one of the world’s best-selling music artists. She has won 22 Grammy Awards and is the most nominated woman in the award’s history. She is also the most awarded artist at the MTV Video Music Awards, with 24 wins, including the Video Vanguard Award. The Recording Industry Association of America recognised Beyoncé as the Top Certified Artist in America, during the 2000s decade. In 2009, Billboard named her the Top Radio Songs Artist of the Decade, the Top Female Artist of the 2000s decade, and awarded her their Millennium Award in 2011. In 2014, she became the highest-paid black musician in history and was listed among Time’s 100 most influential people in the world for a second year in a row. Forbes ranked her as the most powerful female in entertainment on their 2015 and 2017 lists, and in 2016 she occupied the sixth place for Time’s Person of the Year. With the release of Lemonade, Beyoncé became the first and only musical act in Billboard chart history to debut at number one with their first six solo studio albums.

Authenticity
We know how important it is to our customers to know that the memorabilia they are buying is 100% authentic. We fully understand this & take the authenticity of our items very seriously. Autograph It Now has been involved with the trading & selling of sports, Film, TV & Historical memorabilia since 2006, in these 10 years we have built up trusting relationships with a select few suppliers who conduct private signing sessions, as well as conducting our own private signing sessions with some of the biggest names in sport. We provide Certificate of Authenticities with all of our items, these include a signing photo from the session (where possible), our Office address, AFTAL dealer number & Product Code. An example of one of our certificates can be seen below: 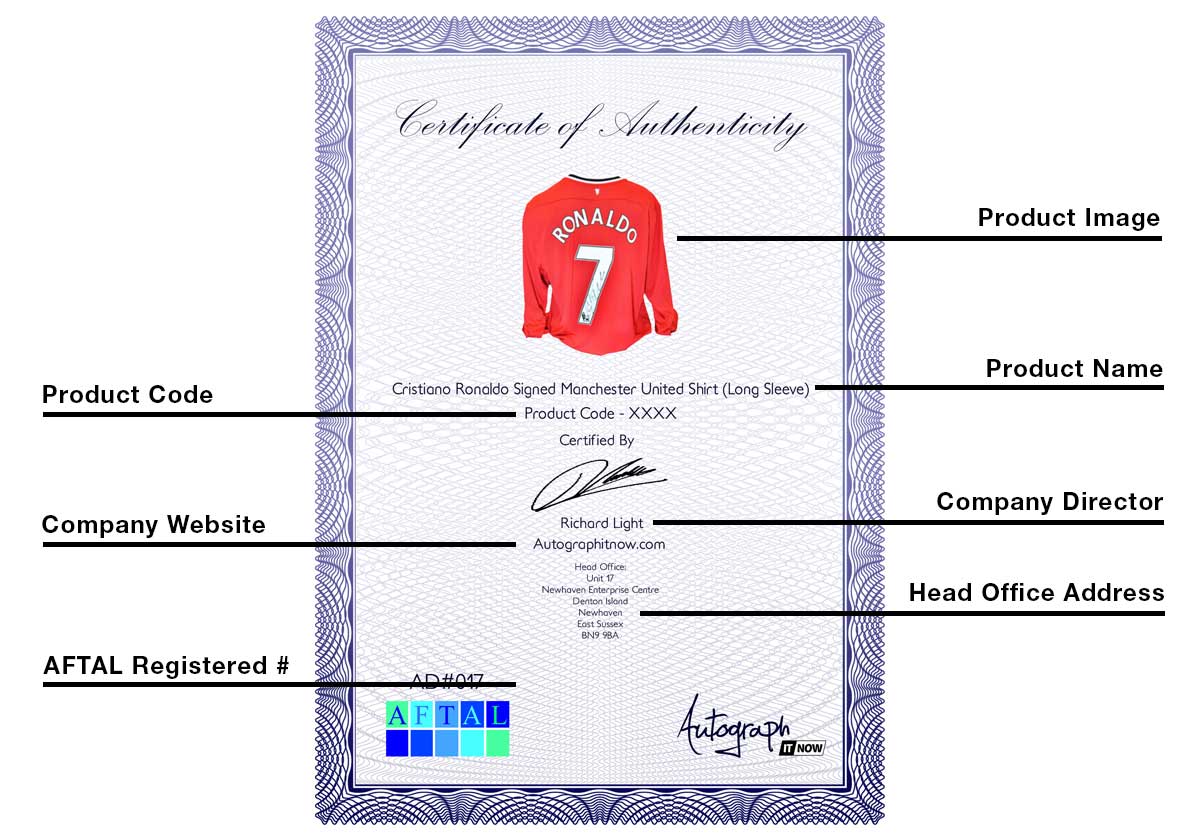 We have also been a member of the Autograph Fair Trade Association (AFTAL Dealer #017) for the last 10 years, who’s sole purpose is to stamp out the fakes & phonies of the industry & direct customers to legitimate traders of authentic memorabilia. A direct quote from the AFTAL website reads: "Inclusion in AFTAL is proof of each dealer’s commitment and professional competence. The Code of Conduct commits each AFTAL approved dealer to providing authentic items, with all the required knowledge, qualification and diligence that that may demand, and is the best possible proof any collector could have when looking to buy authentic signed memorabilia."
Delivery + Returns
Unframed Items – £5.95 Delivery Unframed items are sent out via Royal Mail 1st Class Recorded delivery. We aim to send all unframed items out within 1-2 days of the order being placed. 16 x 12″ photographs & prints are dispatched in sturdy & hard cased tubes & shirts are sent out in well packaged & protected jiffy bags. Framed Items – £5.95 Delivery Our framed items are dispatched using a courier service due to their size, weight and value. All items sent via courier will require a signature and cannot be left in a safe place or with neighbours. Additional delivery charges may apply for areas not in mainland United Kingdom. Please allow up to 10 working days for delivery of framed items, a large majority are framed to order, items that are pre framed will be dispatched within 1-2 days of the order being placed.
FAQs

What does being a “AFTAL approved Dealer” mean?
The “Autograph Fair Trade Association” ( AFTAL ) was formed by a group of acknowledged autograph dealers, with the intention of stamping out the market in fake items and ensuring that the customer is able to find dealers that they can trust. Inclusion in AFTAL is proof of each dealer’s commitment and professional competence. The Code of Conduct commits each AFTAL approved dealer to providing authentic items, with all the required knowledge, qualification and diligence that that may demand, and is the best possible proof any collector could have when looking to buy authentic signed memorabilia. Simply put, there is no reason as to why any honest dealer should not become an AFTAL approved dealer, but many reasons why some could never become an AFTAL approved dealer.

How long will it take for my item to be delivered?
Depending on the size of the item delivery of the item can take between 3 days (Prints/Photos/Unframed Shirts) and up to 10 working days for larger/ heavier items (Framed Shirts/Prints/ gloves).

I have a question about an item I want to purchase/have purchased, who can I contact?
We are happy to help with any questions you may have about any of our items. please feel free to e-mail info@autographitnow.co.uk or call us on 01273 311431.

I am looking to sell a piece of sports memorabilia I have, are you interested in buying it?
No. We do not purchase memorabilia off the general public, we only sell items we know are 100% authentic & we acquire these from a select number of suppliers that we have worked with for over 10 years

Do you provide valuations?
No, we do not offer valuations of any kind on any item

There are no reviews yet.